THE FRONT COVER OF THIS book depicts a happy and healthy Earth after the population has been halved by responsible methods and Earth has been healed of any threat from global warming. The artwork for the front cover consists of a circle representing Earth; words denoting life, love, and happiness springing from the circle; seventy-five dots placed randomly within the circle; and a legend showing that each dot denotes fifty million people. The front cover depicts the largest number of people that I believe Earth can fruitfully sustain after we have stopped using fossil fuels and nuclear power as our sources of energy. This number is 3,750,000,000, one half the current population. I am hopeful that Earth will be able to sustain this many people. The analysts at www.worldpopulationbalance.org claim a sustainable population should be only two billion people.

I often use the expression “specter of human extinction” in this book. As I wrote these words, I saw the need for an image that would personify the specter of human extinction. We need some sort of visual impact to help us keep a proper perspective on the impending ravages of overpopulation, global warming and nuclear power plant disruptions. The image of this specter is displayed on the back cover. I have also placed an icon of this characterization at the beginning of each chapter of this book as a reminder that overpopulation does exist and that the ravages of overpopulation are imminent.

I have used the definition of “specter” from Funk and Wagnalls Standard College Dictionary: “1. A ghost or apparition. 2. Anything of a fearful or horrible nature.” I want you to know that even though my granddaughter and I tried very hard to make the image of the specter into a grim caricature, it came alive as a sad face. But don’t be fooled. Grim or sad, the specter has its work to do. 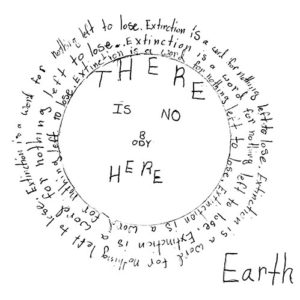 I hope that my efforts to make the specter of extinction of the human race into a visual caricature will help you become more energized in your efforts to combat overpopulation and global warming. Don’t give the specter any opportunity to manipulate minds and events to its purpose; rather, do all you can to help to prevent the specter from gaining its ultimate goal: the extinction of human life on Earth.

Love and happiness are the most positive attributes of people on Earth. These are depicted on the front cover. Live them to their fullest. Do so knowing that Earth’s population can be regulated to a size that will easily promote the acts and arts of living. We must make the future into a time when love and happiness will shine, in nature and in spirit.